Topology: Nets and Points of Accumulation

Recall that a sequence

in a topological space X converges to a in X if the function f : N* → X which takes

. Unrolling the definition, it means that for any open subset U of X containing a, the set

We also saw that if X is Hausdorff, then the limit a is unique, but we won’t make that assumption now.

The key question here is:

is a subspace and

is a sequence in Y converging to

converges to 0 which lies outside Y. In an earlier article, we saw that this is related to the requirement that Y is closed in X. Let’s attempt to reproduce that result for topological spaces.

Definition. Let a be a point in topological space X. We say it is a point of accumulation for Y if for every open subset

containing a, there exists 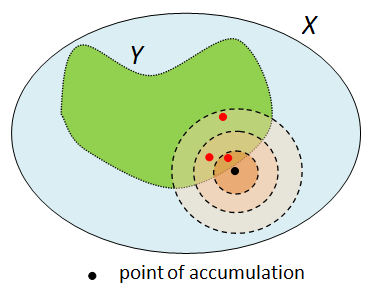 The Case of Metric Spaces

Let’s examine this definition for a metric space X. In this case, a is a point of accumulation for Y iff for each ε>0, the intersection N(a, ε) ∩ Y contains some point other than a. Indeed, (LHS) → (RHS) follows from the fact that N(a, ε) is an open subset containing a, while (RHS) → (LHS) follows from the fact that every open subset containing a must contain an open ball N(a, ε).

Suppose X = R and Y is the set of rational numbers 0 < r < 1. Then any real number in [0, 1] is a point of accumulation for Y since for any ε>0, the open ball N(r, ε) must contain a rational number. [ The full rigourous argument needs a bit more care, but we won’t harp on this any more. ]

This result is reminiscent of an earlier one.

Theorem 1. In a metric space X and subspace Y, the following are equivalent.

, so it is not a point of accumulation of Y. By definition, there exists an open subset U containing a such that U ∩ Y has no point other than possibly a. But a is not in Y anyway, so U ∩ Y is empty, i.e.

The Case of Topological Spaces

We will see later that in the case of topological spaces, (2) and (3) are still equivalent, but (1) fails. The problem lies in the definition of sequences, which is essentially a function f : N* – {∞} → X, and the space N* is given unnecessary prominence. To overcome this one needs a more general form of sequences for topological spaces.

Definition. A directed set is a partially ordered set I such that for any

. In words, this means that every finite subset has an upper bound.

A net in a topological space X (indexed by I) is a function f : I → X, written as

We say that a net

if for any open subset

containing a, there exists an index i such that for all j ≥ i,

Now the following is true.

Theorem 2.  Let Y be a subspace of a topological space X. The following are equivalent.

(1) → (2) : suppose a is a point of accumulation of Y. Let the index set I correspond to the collection of open subsets U containing a, ordered by reverse inclusion:

Since a is a point of accumulation of Y, for each

be a net in Y converging to

Since X–Y is open in X, there exists index i such whenever j≥i,

which is a contradiction. ♦

At this point, the reader may wonder why we need I to be a directed set, i.e. wouldn’t an ordinary partially ordered set (poset) suffice? Indeed, the above theorem seems to work even when I is just a poset.

To answer this question, we provide an alternate definition for nets and limits. Given a directed set I, let

, where ∞ is just a dummy symbol. A basis for open subsets of I* is given by:

To check that this is a basis, we claim that

Thus, the fact that I is a directed set is necessary for Pi‘s to form a basis. Otherwise, they’d only form a subbasis in which case it’s possible for {∞} to be open in I*.

Next, the condition that a net

is exactly the same as that

where the limit was defined in the previous article. Since {∞} is not open in I*, we conclude:

Proposition 3. If X is Hausdorff, a converging net in X has a unique limit.

Finally, we have the following.

Proposition 4. If g : X → Y is a continuous map of topological spaces, then every convergent net

The proof follows from the proposition here.

if and only if

if and only if the function I* → X × Y which takes

is continuous. Now we use the following property, whose proof is left as an exercise.

Another sign that nets are a good way to generalise sequences:

If f : X → Y is a map of metric spaces, then f is continuous if and only if for any convergent sequence

If f : X → Y is a map of topological spaces, then f is continuous if and only if for any convergent net

The forward direction in both cases has been proven in proposition 4 above and here. For the converse:

Second statement: if f is not continuous at a, there exists an open subset

doesn’t contain an open subset of U containing a. As before, let the index set I correspond to the collection of open subsets of X containing a, ordered by reverse inclusion:

Since no Ui is contained in f-1(V), we can pick

for each i. Then

is a net approaching a but

doesn’t approach f(a) since they lie outside V. ♦