Let X be a topological space. Recall that if U is a clopen (i.e. open and closed) subset of X, then X is the topological disjoint union of U and X–U. Hence, if we assume X cannot be decomposed any further, there’re no non-trivial clopen subsets of X.

Definition. The space X is connected if its only clopen subsets are X and the empty set. Equivalently, there’re no non-empty disjoint open subsets U, V of X such that

The following characterisation of connected sets is simple but surprisingly handy.

Theorem 1. X is connected if and only if any continuous map

where {0, 1} has the discrete topology, is constant.

Thus, it’s disconnected if and only if there’s a continuous surjective map

If f is not constant, then

are non-empty disjoint open subsets such that

where U, V are non-empty, disjoint and open in X, then we can set

With this theorem in hand, the remaining properties are surprisingly easy to prove.

Proposition 2. If Y is a connected subset of X, then its closure

so Y is dense in Z. Suppose

is constant (say, 0) since Y is connected. Since

is closed and contains Y, it must be the whole of Z. ♦

is a continuous map of topological spaces and X is connected, then so is f(X).

Replace Y by f(X); we may assume f is surjective. Suppose

is a surjective continuous map. Then

is also continuous and surjective, so X is disconnected (contradiction). Hence, g does not exist. ♦

The union of connected subsets is not connected in general; in fact, topological disjoint unions of two or more non-empty spaces are never connected. But if the spaces share a common point, we have the following.

be a collection of connected subspaces of X. If

be a continuous map. Then each

Lemma. A subset of R is connected if and only if it’s one of the following:

The proof is long but conceptually easy. First we show that (a, b) is connected.

Since (a, b) is dense in all the bounded intervals

To prove the converse, we note that if

and the two open subsets are non-empty since they contain a and b respectively. ]

The fact that a isn’t in X shows that equality holds. ] ♦

Let X be a topological space. For any two points x, y in X, write x ~ y if there’s a connected subset of X containing them. We claim this gives an equivalence relation; indeed, it is clearly reflexive and symmetry. Transitivity follows straight from proposition 3.

Definition. The equivalence classes of this relation are called the connected components of X.

Note that each connected component Y is a maximal connected subset of X, in the sense that if we add any point outside Y, the resulting set won’t be connected.

We know that X is a set-theoretic disjoint union of its connected components. It’s tempting to think that X is a topological disjoint union as well. But that’s wrong. Indeed, let’s look at X = Q (as a subspace of R). The only connected subsets of X are the singleton points {x}: for if

with a<b, then we can pick an irrational r, a<r<b so that

is a disjoint union of two non-empty open subsets. So Y is disconnected.

Thus, the connected components of Q are the singleton sets. But Q is clearly not discrete.

Definition. A space whose connected components are all singleton sets is said to be totally disconnected.

Thus, a discrete space is totally disconnected but not vice versa.

The example of Q shows that connected components are in general not open. However, they’re closed.

Proposition 5. Every connected component Y of a topological space X is closed.

This follows almost immediately from proposition 2: since Y is connected, so is

But Y is a maximal connected subset, so

is a collection of non-empty topological spaces, the product

is connected if and only if each

(→) is obvious since each

is the continuous image of the projection map from X. For (←), let

be surjective and continuous. Let

is open, it contains a basic open set of the form

for all but finitely many i‘s :

Next, use the following.

Hence on the LHS of (#), we can change the coordinates

one at a time and see that the whole

The above sublemma holds for the box topology too. This may con us into believing that

under the box topology is also connected. But let’s take

the space of all real sequences and U the subset of all sequences converging to 0. Any

is also contained in

which is open in the box topology and contained in U. Thus U is open. The same holds for any

so X–U is also open. [ Note that the sublemma implies altering a single term in a sequence has no effect on whether it converges to 0. ] 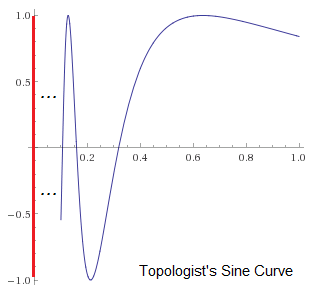 Which of the following is/are correct for a subset Y of X?