Having defined submodules, let’s proceed to quotient modules. Unlike the case of groups and rings, any submodule can give a quotient module without any additional condition imposed.

Definition. Let N be a submodule of M. By definition, it’s an additive subgroup which is normal since (M, +) is abelian. So take the group quotient M/N and define a module structure on it via the scalar multiplication:

This is called the module quotient.

The only worrying aspect is that scalar multiplication is well-defined: i.e. suppose m+N = m’+N; is it true that (rm)+N = (rm’)+N then? Well:

The remaining axioms of a module are then easily verified.

The definition is straightforward.

Definition. Let M and N be R-modules. A module homomorphism is a function f : M → N such that:

Notice that since f is a homomorphism of the underlying additive groups, we automatically have f(0) = 0 and f(-m) = –f(m). As in the case of groups, an injective (resp. surjective / bijective) homomorphism is called a monomorphism (resp. epimorphism / isomorphism).

The following properties are hardly surprising:

be a homomorphism of R-modules.

In other words, the “push-forward” or “pull-back” of a submodule is also a submodule.

The proof is easy: we know that f(M’) is an additive subgroup of N. Next, if

Likewise, f-1(N’) is an additive subgroup of M. If

In particular, we have the following special cases.

Definition. For a module homomorphism

is called the kernel of f; this is a submodule of M, denoted ker(f).

is called the image of f; this is a submodule of N, denoted im(f).

Finally the cokernel of f, denoted coker(f), is the quotient

As before, we have the standard three isomorphism theorems.

be a homomorphism of R-modules. Then

to f(m). Let’s show that g is injective and well-defined. Indeed:

Finally, g is surjective by the definition of im(f), so we’re done. ♦

Armed with the first isomorphism theorem, the remaining two are a piece of cake.

be submodules. Then N/P is a submodule of M/P and

Apply the first isomorphism theorem. The kernel of this map is

Theorem. Let N be a submodule of M. We have a bijection: 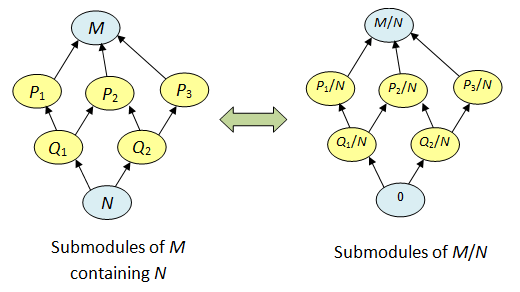 One then checks that

always holds, and that if P contains N, then we have

[ Hint for exercise: avoid “picking elements” from the submodules if possible; instead argue that the intersection or sum satisfies some unique property pertaining to inclusion of submodules.]

It’s clear that given any two R-modules M and N, we can form the product M × N and let R act on it component-wise. On the other hand, with infinitely many modules, there’re two common ways to construct this “product”.

Definition. Consider any class of R-modules

The difference may seem subtle, but these two modules turn out to be quite different in their behaviour. In fact, one can even say they’re dual to each other, thanks to their universal properties.

Universal Property of Direct Product. For each index j, let

be the projection map. If N is a module and

is any collection of module homomorphisms, then there’s a unique 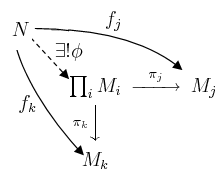 Universal Property of Direct Sum. For each index j, let

be the natural inclusion map which takes

which comprises of all zeros except

If N is a module and

is any collection of module homomorphisms, then there’s a unique 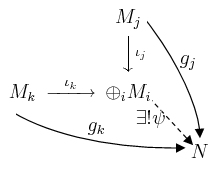 For direct product, the collection of maps

gives rise to the map

One easily checks that this is a module homomorphism and that it is the unique map satisfies the desired requirement.

For direct sum, the maps

This is well-defined since there are only finitely many non-zero mi‘s so the RHS is a finite sum. ♦

Consider the case where R=Z and

doesn’t satisfy the universal property for direct sum and why