In this article, we describe a way of removing the internal squares of a skew SSYT to turn it into an SSYT.

; we define an inside corner to be a square in

Note that there is some ambiguity in this definition, since there is generally more than one way of writing a skew diagram in the form

In the left diagram, there is only one inside square at (2, 2) while in the right diagram there are two inside squares at (1, 2) and (2, 1).  Henceforth, our construction is performed with respect to a fixed representation of the skew diagram as

Removing an Inside Corner

Now we describe the procedure. Let

be a skew SSYT; pick any inside corner

a blank square. At each step, we look at its right and below.

Note that at each step, the rows are guaranteed to be weakly increasing and the columns strictly increasing, so at the end we get another skew tableaux but with one less empty square. 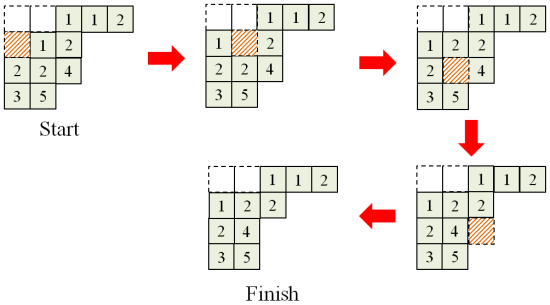 Lemma. The process is reversible, i.e. starting from the skew tableaux at the end, and an additional square at the end of a row such that the union is still a skew diagram, we can reverse the process of sliding.

One observes that at each step of the sliding process, the move applied is the only possible one such that the rows remains weakly increasing and columns strictly increasing, i.e. the move is the only legal one available.

The same holds for the reverse sliding process: at each step, we take the empty square and look at its left and above, then swap with the larger one; if both are equal, we swap with the one above. ♦

Definition. The sliding algorithm on a skew SSYT

is as follows: we iteratively remove inner squares as above until we get an SSYT

It is a non-trivial result that the resulting

is independent of our order of removal, or our choice of expression

There are two ways to perform the sliding algorithm on the following skew SSYT. Check that they both lead to the same SSYT.

Assuming the above uniqueness result, we define the following.

is obtained by placing

on the right to form a skew SSYT as follows:

then performing the sliding algorithm to turn it into an SSYT.

It is also true that the product is associative. All these will be proven within the next few articles.