Character theory is one of the most beautiful topics in undergraduate mathematics; the objective is to study the structure of a finite group G by letting it act on vector spaces. Earlier, we had already seen some interesting results (e.g. proof of the Sylow theorems) by letting G act on finite sets. Since linear algebra has much more structure, one might expect an even deeper theory.

Some prerequisites for understanding this set of notes:

[ We’ve yet to cover module theory and linear algebra; hopefully this will be rectified in the future. ]

At one point, one also needs to take the tensor product

, where M is an R-module and

are (non-commutative) rings. But this is a rather minor aspect, and we’ll also describe the explicit construction so the reader can just accept some of the results at face value for now.

Definition. A representation of a group G is a group homomorphism

where V is a finite-dimensional vector space over field K.

If we fix a basis for V, then this is tantamount to giving a group homomorphism

, where n = dim(V). Thus, each element of G now corresponds to an n × n matrix with entries in K such that product in G corresponds to product of matrices.

[ Note: throughout all notes on this site, matrix representation for a linear map is obtained via

Just like the case of group actions, we can think of a group representation as providing a map:

which is conveniently denoted g·v instead. This satisfies

for all group elements

Under this notation, one also says G acts on V.

Example 3 above is clearly generalisable: if G acts on finite set X, then let V be a vector space with abstract basis

acts on V by taking

In particular, any group G acts on itself by left multiplication, so this gives a representation of dimension #G. Explicitly, V is given an abstract basis

and the action of

Definition. Given field K and finite group G, the group algebra K[G] is a K-vector space with an abstract basis given by:

Some concrete computations will make it much clearer. Suppose

and K=C. Then a typical product of elements of C[G] looks like:

The following should now be clear.

Theorem. The group algebra K[G] is a ring which contains K as a subring. It is commutative if and only if G is abelian.

As a ring, we can talk about left modules over K[G]. These turn out to correspond precisely to representations of G.

Let’s do the easy direction first: suppose we’re given a left K[G]-module V. Then V is naturally a K-vector space and we obtain an action of G on V by restricting the left-module action

we get a representation of G on V.

gives rise to a linear map

We’ll define a K[G]-module structure on V, by first decreeing that

act on V via ρ(g), then extending linearly to the whole K[G]. Explicitly:

Consider example 4 from section G1, where

is cyclic of order 3 and the representation takes a to

Now a typical element of K[G] is of the form:

The corresponding matrix is then:

. This represents the action of

We’ll look at ways to create new representations of G from existing ones.

If R is a ring, then the direct sum of two R-modules is another one. In particular, this holds for R = K[G] as well. Specifically, if

are both representations, then the direct sum

If we pick bases of V1 and V2, then the resulting basis of 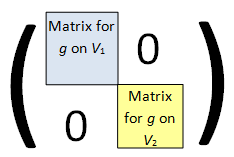 B. Submodules and Quotients

Generally, if M is a left R-module and

a submodule, we get a quotient module M/N. When V is a left K[G]-module, a submodule

is said to be a G-invariant subspace. Clearly, this is a vector subspace; also, for each

the action of g on V results in

Conversely, if W is a vector subspace of V which is invariant under all

then it is a K[G]-submodule.

If we pick a basis of W and extend it to V, then the matrix representation of 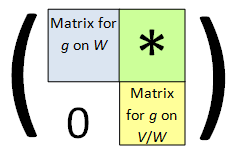 If V and W are K-vector spaces, we can take their tensor product over K:

is a basis of V and

a basis of W, then

gives a basis of the tensor product X.

, since the action is linear on both V and W, this induces a linear map

this is easily seen to be true:

Since the set of all such elements spans

the result follows. In terms of matrix representation, we get: 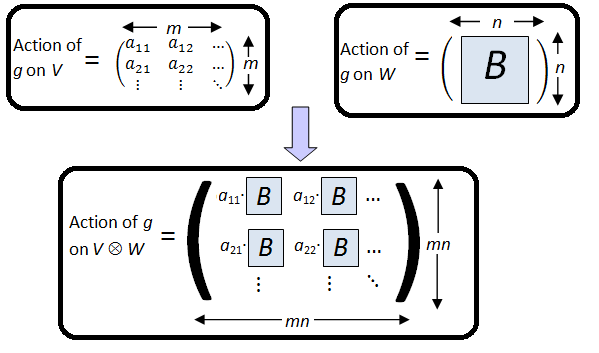 Suppose V and W are K[G]-modules. The space of all K-linear maps

is also a K[G]-module. To define the action of G on X, let’s imagine a  K-linear map f : V → W written in the form of a huge lookup table (v, f(v)) such that each v occurs exactly once on the left. Now let G act on the entire table by replacing (v, f(v)) with the pair (g·v, g·f(v)). Unwinding the definition, we see that G acts on X via:

Note that in the composition gfg-1, the left g acts on W while the right g-1 acts on V.

A special case of the above is when W = K with the trivial representation. The resulting HomK(V, K) is known in linear algebra as the dual space V*. The above definition then gives us an action of G on V* via:

Let’s do some sanity check here. From linear algebra, there’s a canonical isomorphism:

If both V and W are K[G]-modules, then there appears to be two different ways to define a G-action on HomK(V, K). Fortunately, both ways are identical; this can be checked by letting

act on the element

on the left and the map

Given a finite group G and field K, we’ve defined the group algebra K[G] which is a ring containing K. This is done by using an abstract basis

so that the dimension of K[G] is precisely the order of G. Product is defined via

There’s a one-to-one correspondence between (1) K[G]-modules, and (2) linear representations of G on K-vector spaces.

Everything presented so far is rather generic; in fact, one could even take K as any commutative ring and there’d be no effect on the theory thus far. In the next installation, we’ll explore the structure of K[G]-modules in greater detail.