[ This is a continuation of the series on Basic Analysis: Sequence Convergence. ]

In this article, we’ll describe rigourously what it means to say things like

for some positive ε.

For example, here’s a punctured neighbourhood of 3:

Definition. Suppose f(x) is a function defined on a punctured neighbourhood of a real number a. We write 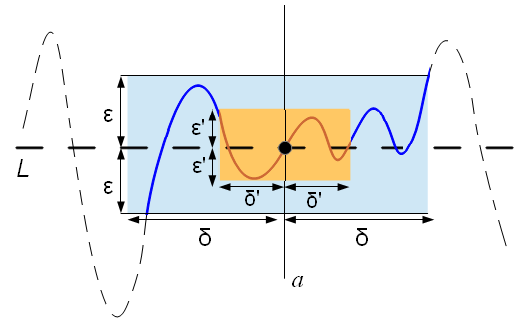 The limit is unique, i.e. if

, defined on x≠2. Prove that

We have the following properties, which are similar to the case for the limit of a sequence.

Theorem. Let f(x), g(x) be functions defined on a punctured neighbourhood of a. Suppose

In the remaining of this article, we’ll use the mnemonic “P(x) holds when x is close to a“, to mean “there exists δ>0, such that whenever 0<|x-a|<δ, P(x) holds“. Now, the definition of continuous limit can be shortened to:

Now we’re ready to prove the above properties.

The second property says there exists B>0 such that |f(x)|<B for x close to a. This follows straight from the definition.

For the third property, write:

As corollaries, we obtain:

, which can be easily proven from ε-δ definition. Now, apply the above properties successively:

Often, we encounter functions which are only defined for x>a, in which case the limit approaches from only one side.

Definition. Let f(x) be defined on the open interval (a, b) for some b>a. We write

Likewise, suppose f(x) is defined on the open interval (c, a) for some c<a. We write

Suppose f(x) is defined on a punctured neighbourhood of a. Then:

, so there’s a need to talk about a limit “approaching infinity”. Then there’s the case where x itself can approach +∞ or -∞. All these cases multiply to a huge number of possibilities! We can summarise by saying:

Here, the square brackets match each other while the curly brackets also match. So all in all, we get 15 definitions in a single statement.

But the vast number of possibilities can overwhelm us when we try to prove even the simplest properties (imagine writing this article 15 times, with only minor differences across the articles). One wonders if there’s a better approach: the answer is yes, by considering topologies on the domain and codomain and thinking in general terms of limits, but that’s another story for another day. For now, we’ll just proceed as usual, focusing on one or two special cases for each result.

This entry was posted in Notes and tagged advanced, analysis, limits, punctured neighbourhoods. Bookmark the permalink.