In this lesson, we will work on a large class of games, known as take-and-break games. First consider a simple example.

Start with a few heaps of contiguous bottles, e.g.

Each player alternately knocks down one or two adjacent bottles, until there is nothing left. The player who removes the last bottle wins. Note that knocking down a bottle or two splits a heap into two smaller heaps unless the bottle(s) are at the end of the heap.

An example of a valid move of the above game is:

which divides the middle heap into two. This can then be followed by:

etc. We will analyse this game using the theory we’ve just developed. First consider the Kayles game with one single heap of n bottles. If we can find the Nim value of one heap, then we can certainly find the solution to any number of heaps.

For example, consider the sum of Chinese chess and international chess, as below. (In this particular game sum, though, it’s not clear how to determine the winner.) 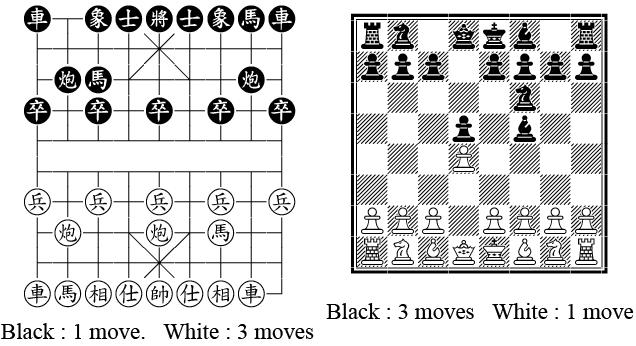 Having described the concept of sum,  we may state the main result.

is the “addition without carry” operation defined in the last lecture.

We will not prove this theorem here, but eventually we will when we introduce the general abstract theory. For now let us contend ourselves with some heuristic understanding.

The idea is that if G has Nim value *m, then we saw in the previous lesson that one can replace the game G by *m in a game sum without significantly altering the game play. Oh there’re some slight differences alright, such as the ability for the players to increase the Nim value. However, this makes no difference to the winning player, since he can make a winning move to a position with a smaller Nim value. It makes no difference to the losing player either, since his opponent can push back the Nim value to the old one.

Confused? Hopefully, the following example gives you a better idea.

be the game of Kayles with a single heap of n bottles. Our objective here is to compute the Nim value of

for higher values of n?

The Nim value of K7  is the smallest Nim value which does not occur among all its moves, i.e. *2 in this case.