Some Results on Posets

In this article we have two goals in mind:

The latter is of utmost importance in diverse areas of mathematics.

A partial ordering on a set S is a relation ≤ on S × S, satisfying the following.

Given a partially ordered set

is a poset, then so is

Duality allows us to cut our work by half in a lot of cases.

For example, let X = {a, b, c} and let S be the following subsets of P(X) under inclusion. 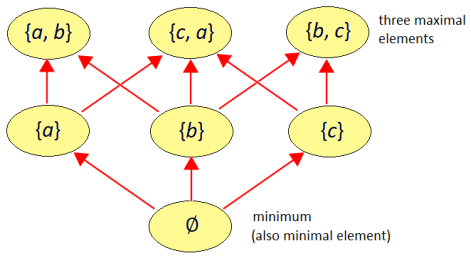 The following properties are obvious.

be the maximum of S?

Finally, for a subset T of an ordered set S, we define the following.

An upper bound (resp. lower bound) of T in S is an

Clearly, upper and lower bounds are not unique in general. E.g. for

under the arithmetic ordering, the subset T of even integers has no upper or lower bound. The subset T’ of squares has lower bounds 0, -1, -2, … but no upper bound.

This will be used a few times in our study of commutative algebra.

A poset S is said to be noetherian if every non-empty subset T of S has a minimal element (in T).

It is easy to see that every finite poset S is noetherian.

Note that examples 2 and 3 are not totally ordered. The key property of noetherian sets is the following.

Let T be a subset of a noetherian poset S satisfying the following.

To paraphrase the condition in words: if T contains all elements of S smaller than x, then it must contain x itself.

is non-empty so it has a minimal element x. By minimality, any

cannot lie in U so

. But by the given condition this means

, which is a contradiction. ♦

Here is an equivalent way of expressing the noetherian property.

A poset S is noetherian if and only if the following hold.

(⇒) Suppose S is noetherian and

are elements of S. The set

thus has a minimal element

, equality must hold by minimality.

be a non-empty subset with no minimal element. Pick

; it is not minimal, so we can find

is not minimal we can find

Finally we have the following critical result.

Let S be a poset. A chain in S is a subset which is totally ordered. Suppose S is a poset such that every chain

has an upper bound in S.

Then S has a maximal element.

A typical application of Zorn’s lemma is the following.

Every vector space V over a field k has a basis.

This looks like an intuitively obvious result, but try finding a basis for the ℝ-space of all real functions

. Using Zorn’s lemma, one can show that a basis exists but describing it does not seem possible. Generally, results that require Zorn’s lemma are of this nature: they claim existence of certain objects or constructions without exhibiting them explicitly. Some of these are rather unnerving, like the Banach-Tarski paradox.

be the set of all linearly independent subsets of V. We define a partial order on

by inclusion, i.e. for

if and only if

. Next, we claim that every chain

has an upper bound.

; we need to show that D is a linearly independent subset of V, so that

is an upper bound of

, being a chain, is totally ordered so without loss of generality, we assume

is linearly independent, we have

Now apply Zorn’s lemma and we see that

has a maximal element C. We claim that a maximal linearly independent subset of V must span V. If not, we can find

outside the span of C. This means

is linearly independent, thus contradicting the maximality of C. ♦

Zorn’s lemma holds vacuously when S is empty. However, in many applications of the lemma, constructing an upper bound for a chain

requires T to be non-empty. In such instances, we will mentally replace Zorn’s lemma with the following equivalent version.