Here, we will give a different interpretation of the Schur polynomial, however this definition only makes sense in the ring

For a given vector

of non-negative integers, define the following determinant, a polynomial in

For the case where

The following result is classical.

In the above matrix, swapping any distinct

results in an exchange of two columns, which flips the sign of the determinant. Thus when

It remains to prove the first statement.

For that, note that

are both homogeneous of degree

so they are constant multiples of each other. Since the largest term (in lexicographical order) is

on both sides, equality holds. ♦

is a partition with

; append zeros to it so that

Being a quotient of two alternating polynomials,

is symmetric; note that it is homogeneous of degree

is precisely the Schur polynomial

; this will be proven through the course of the article.

is taken over all partitions with

such that no two of them lie in the same row.

We need to show

Note that both sides are homogeneous of degree

; hence let us compare their coefficients of

Since both sides are alternating polynomials, we may assume

, each term is of the form

so the exponents of

are all distinct. Now, multiplying by

increases each exponent by at most 1. Thus to obtain

such that the exponents remain strictly decreasing.

corresponds to a binary n-vector

of weight r, such that

is strictly decreasing. And the latter holds if and only if

In diagrams, this corresponds to: 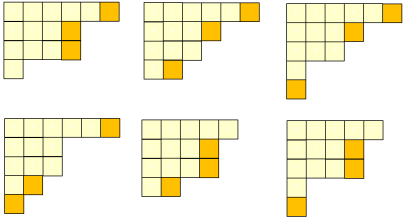 is the Schur polynomial

We wish to show

and the Young diagram for

boxes such that no two lie in the same row; the sum is over the set of all such

Label the additional boxes in

and take the transpose; we obtain an SSYT of shape

; here is one way we can successively add squares:

, the number of occurrences of

in the above nested sum is

; we have, in the formal ring

) is taken over all partitions obtained by adding

, such that no two of them lie in the same row (resp. column).

By the earlier Pieri’s formula, the first formula holds in all

. Hence it holds in

to it and using

we get the second formula. ♦