Polynomials and Representations I

We have already seen symmetric polynomials and some of their applications in an earlier article. Let us delve into this a little more deeply. Consider the ring

of integer polynomials. The symmetric group

acts on it by permuting the variables; specifically,

. Denote the ring of symmetric polynomials by:

This is a homogeneous ring, written as a direct sum:

is the additive group of homogeneous polynomials of degree

Let us fix n, the number of variables.

is a free additive abelian group. For example, for

More generally, recall that a partition

is a sequence of non-negative integers:

Definition. Given a partition

be the symmetric polynomial obtained by summing all terms of the form:

The following result is clear.

is free with basis given by

Let us consider an example where

Note that for brevity of notation, we write

. However, if the subscripts involve variables, we will include the commas for clarity.

Recall that the elementary symmetric polynomials in x, y, z are given by x+y+z, xy+yz+zx and xyz. Generalizing this, we define:

Furthermore, given a partition

, we can take as many terms as we want by increasing

denotes the sum of all

), it is natural to ask the following question.

-linear combination of the monomial polynomials

In our above example, expanding

with WolframAlpha gives us:

In the remaining of this article, we will describe a more systematic method of computation.

Here is our main result.

where we sum over all partitions

is given by the number of matrices

with entries either 0 or 1 such that

Here is a sample computation: take the polynomial

above and find the coefficient for the monomial

For that, we need to find the number of binary matrices with column sums

As expected, we get 5 solutions: 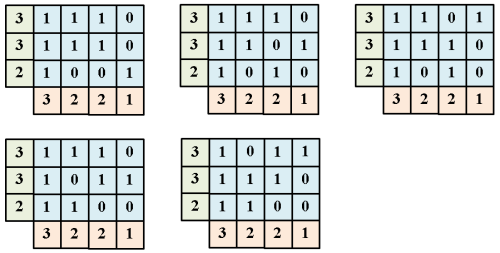 Using the above example with

and attempt to find the coefficient of

We wish to expand:

Here is one way we can multiply terms to obtain

Thus each binary matrix corresponds to a way of obtaining

In the definition of

, the variable n is ostensibly missing. However note that if

since it would involve more than n variables. For example, if

, then the above expansion gives

One can verify this directly by expanding

On the other hand, if

as a linear combination of the monomial symmetric polynomials:

Check your computations with WolframAlpha.

2. Write a program in Python (or any language) which computes

4 Responses to Polynomials and Representations I