From Euler Characteristics to Cohomology (II)

Hence even after successive steps, the Euler characteristic

, where ni denotes the number of i-dimensional cells, is constant. So χ(M) is independent of the cell decomposition we pick for M and can be used to distinguish between topological spaces, i.e. if χ(M)≠χ(N) then M and N are not homeomorphic as topological spaces.

In fact, it is possible to obtain even finer distinguishing characteristics for the topology of M, known as Betti numbers. For starters, consider the boundary function ∂ which takes a cell to its boundary ∂C, while taking into account its orientation. If C is i-dimensional, then ∂C is a union of (i-1)-dimensional cells. For example, in the following diagram, ∂C can be expressed as a sum of 5 edges:

The critical observation is that when we partition a cell into two, written as

, then the boundary map is additive:

as can be seen in the following diagram: 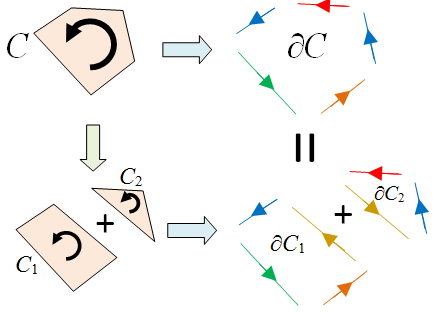 since the two edges which are equal but in opposite directions cancel each other out. The next property we note is that ∂(∂C) = 0, as illustrated by the following diagram.

This suggests the following: let Si denote the set of i-dimensional cells in the decomposition. An i–chain is defined as a formal sum

are i-dimensional cells and

These sums are formal in the sense that we merely treat them symbolically; the set of such sums forms a real vector space

via the following operations

The boundary map then gives a linear map:

such that the composition

is the zero map. It follows from basic linear algebra that we have

Definition. The i-th Betti number, denoted bi, is the dimension of the quotient

We’ll briefly justify why this definition is independent of our choice of cell decomposition. It suffices to reduce to the case where we partition an i-dimensional cell

The boundary maps are then modified by adding the following relations:

from which we can show that

Consider the torus, which is obtained by gluing the opposite sides of a square together in the same direction: 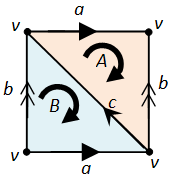 The above cellular decomposition then comprises of the following cells:

Then we have the following relations:

Now we can easily compute the Betti numbers of the torus.

Verify the Betti numbers of the following surfaces: 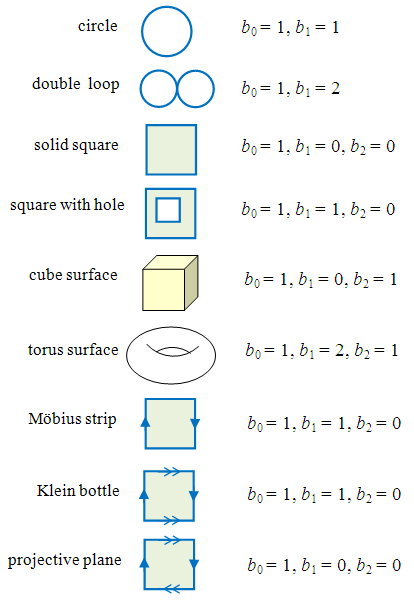 In fact, by considering the abelian groups

instead of vector spaces

and taking group quotients instead of vector space quotients, one can obtain an even finer distinguisher of topological spaces. The resulting groups are called homology groups and denoted by

For example, consider the projective plane and the square which have the same Betti numbers.

If we let M be the projective plane on the left, we get:

so the second homology group is

has Z-basis a+b and c. Thus, the resulting group quotient is

has basis x–y while

has basis x, y, so the homology group is

On the other hand, we leave it to the reader to check that if N is the square, then

Compute the homology groups for each of the nine shapes in the previous exercise.

At higher dimensions, it will be a hassle to illustrate the various cells and their boundaries. Thankfully, in the case of simplicial complexes, this can be calculated combinatorically without any need for diagrams. Here, each m-dimensional cell is written as an (m+1)-tuple of points:

with its boundary given by:

where the i-th term has all vertices except

As an exercise, check that under this definition, we have

Suppose we have the following simplicial complex which is the union of a tetrahedron’s surface and a triangle.

This comprises of four 2-simplices, eight 1-simplices and five 0-simplices. The boundary maps are given as above, e.g.

Now it suffices to obtain the homology groups from the sequence

which is left as an exercise for the reader.

In general, expressing a topological object as a simplicial complex can be a rather tedious affair, for the vertices of each simplex must be distinct, and two distinct simplices cannot be represented by the same tuple of vertices. E.g. in the case of a torus, one possibility is the following: 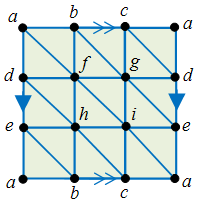 Exercise. What’s wrong with the following simplicial complex for the torus? 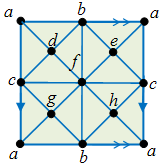 One can obtain the Euler characteristic of M from its Betti numbers:

Theorem. For any object M, we have:

. Recall that the principle of inclusion and exclusion allows us to compute the Euler characteristics of X from those of M, N and M ∩ N. The question is: what about Betti numbers and homology groups? We would very much like to say

but we would be lying if we did. Instead, we have the extended exact sequence:

[ Note: an exact sequence of abelian groups is a sequence of maps as above such that for any two consecutive maps

of two groups is simply their product. ]

then maps chains of M to those of

Clearly, if an m-chain D of M satisfies ∂D = 0, so does its image in

Furthermore, if the chain D is of the form ∂E for some (m+1)-chain E, then the image D’ of D in

induces a map of homology groups:

are injective, in general

are not. ] Likewise, the inclusions

The map left of interest is the boundary map:

For that, suppose we have an m-chain D of

The boundary map is also denoted ∂, which may cause some confusion since the same symbol was earlier used to for a map taking m-chains of M to (m-1)-chains of M.

[ For the conscientious reader, the map is well-defined because

This is the union of

The long exact sequence above thus gives (together with

since we’re dealing with two or three-dimensional objects here):

Since M and N are homeomorphic to the solid ball

since it’s easy to check that

2 Responses to From Euler Characteristics to Cohomology (II)