In this lesson, we will focus on a special type of game called Nim. Although it’s only one out of infinitely many possible games, understanding it in depth will be very beneficial in analysing a much larger class of games, known as impartial games. (The exact definition of this term is deferred until a later lesson.)

The rules of this game are as follows:

Start with r heaps of stones, of sizes

. Play alternates between two players: at each player’s turn, he must pick a heap and remove as many stones as he wants from it, possibly even emptying the heap. However, he can remove stones from one and only one heap.

Here is an example of a game between two players:

Thus the second player wins in this match.

Of course, we could do our analysis as in the previous lesson: to check whether (3, 5, 8) is winning or losing, we could iteratively compute the status of

. But this would require us to compute the status for 3 × 5 × 8 = 120 positions, even for a simple configuration like (3, 5, 8), which is way too much work. Thankfully, there is a beautiful solution for the problem.

If you understand what binary representation is, you may skip this section entirely. The crux of the matter is the following result:

The keyword here is “distinct”. To write a number n as a sum of distinct powers of 2, let

be the largest power of 2 which does not exceed n. Now consider the difference

and there is nothing left to do. Otherwise, d > 0. We claim that

would be at least

which contradicts the maximality of r. (q.e.d.)

Now do the same with 9: the largest power of two not exceeding it is

and the difference is:

so we can write

. We will write this more compactly as follows:

This is known as the binary representation of 25. We can add as many leading zeros as we want:

Now count the number of ones in each column and note their parities. In our example, we have (from left to right): 2, 2, 1, 0, 3. Their parities are even, even, odd, even, odd respectively. The big theorem is as follows:

The above Nim configuration is a losing position if and only if there is an even number of ones in each column.

Hence, the above configuration is winning (i.e. first player wins) since there are an odd number of ones in the rightmost column. One naturally asks for a proof to this theorem. Instead of a rigourous proof, we will instead explain a winning strategy, from which the proof should be apparent. For now, let’s look at another example.

Now there are an even number of ones in every column, so the second player wins.

Knowing the status of the game position is just half the battle won – you need to know how to exploit a winning position to obtain an eventual victory. Below, we will explain how to do this, by looking at the case of (17, 25, 13) above. As before, write:

Starting from the leftmost position, find the first column c which has an odd number of ones:

Next, pick a heap number m which has a one in that column. Such a heap must exist, since otherwise, there’d be no 1’s in that column (and thus, an even number of ones). In our example, we must take m = 13. Now remove the binary digits of m from column c to the right.

Fill in our desired binary digits in order to have an even number of ones in each column:

Note that this is a losing position by our theorem, so it would do us good to leave this configuration for our opponent. Also, such a move is always possible since we’re flipping the ‘1’ in column c to ‘0’, and no bits to the left of c are changed. So the resulting number is always smaller than m. Since (1000) = 8 in binary, in our example, a good move would be:

Given a Nim game

are fixed, then there’s only one possible

for which G is a losing position. Indeed, suppose r= 3 and

, we write the binary representations:

For each column of

, there’s a unique bit such that the total number of ones in that column is even:

is unique and also gives us a recipe for calculating it: simply add the two numbers in binary and ignore any carry which might occur. Addition has never been easier! Just perform 0+0 = 0, 0+1 = 1+0 = 1, 1+1 = 0 and forget the carry. This operation is called XOR for exclusive-or, or sometimes just addition without carry and denoted by

Incidentally, this also explains why every losing position must lead to a winning one in the next move. For if

were a losing position, then:

Another way of writing this would be

. Hence, if the first player makes a move from

, then it would result in

which is a winning position. Since there’s nothing special about the last heap

, any move would also result in a winning position. 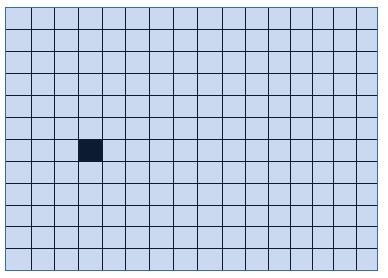 Unfortunately, the black square is burnt and inedible. Now Alice and Bob play a game as follows: each child alternately cuts the cake into two (possibly unequal) pieces, by a horizontal / vertical cut which is along a gridline. He/she then eats the edible piece and leaves the other behind. Whoever is left with the burnt piece is deemed to have lost and must do the dishes. If Alice starts the game, can she avoid the dishes? 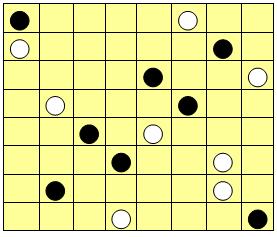 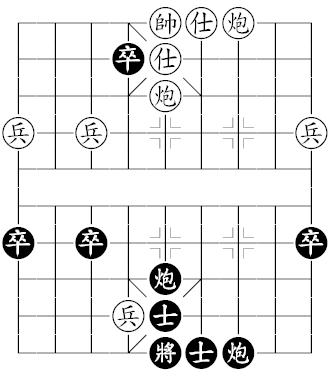