This suggests that if we’re looking at the state variable U, then it’s a good idea to re-parametrise it as U = U(S, V, N). The above equation then tells us:

[ For students who’re unfamiliar with partial differentiation, this means: if we keep the parameters V and N constant and differentiate U with respect to S, then the result is T. E.g. if

What if we wish to parametrise in terms of T, V and N? The best approach is then to define F = U – ST, the Helmholtz free energy. If we perturb the system by a little bit, then the change in F is:

. But is there any physical meaning to F other than a mere symbolic convenience? Well, yes. There’re at least two ways of looking at it.

This is the amount of energy required to create the system when it’s fixed at constant pressure P (called an isobaric setting): in addition to the internal energy U, the system has to do work in order to maintain its pressure. Since P is constant, the work done is PV.

This is the amount of energy required to create the system in an isobaric and isothermal setting (i.e. its pressure is kept constant and at the same time, it’s connected to a constant heat source).

Let’s summarise the large number of state parameters we have:

Each of these state parameters can be classified from the following question: if we take the union of two identical systems, do we get the same parameter, or twice the parameter? If it’s the former, we say the parameter is intensive; for the latter, extensive. In this list, the only intensive state variables are P and T while the rest are extensive. Thus, for the internal energy U, we have:

for any positive value of λ. We also get:

The second relation is particularly interesting: if T and P are kept constant, then G is linear in N! Hence we can write

. This is called the chemical potential of the system. This parameter is clearly intensive.

Example 9. Let’s go back to the problem of finding the entropy of an ideal gas. We had obtained:

To figure out the right t(N), we use the fact that S, V, N are extensive while P is intensive, i.e.

. Simplifying this relation, we obtain:

and N by N and N0 respectively, we see that t(N) is of the form:

for some constant k. Hence, the formula for entropy is now:

We will leave it at that, since figuring out k is rather tricky business which requires quantum mechanics. The complete version of the equation, known as the Sackur-Tetrode equation, even depends on the mass of each particle!

Phase transition occurs when the system experiences a sudden change in its physical properties. Typical examples that we see in everyday life include boiling / condensation and freezing / melting. The theory of thermodynamics allows us to model the behaviour of matter, if not quantitatively, then at least qualitatively.

The following is extracted and rephrased from David Tong’s notes on statistical physics, but any mistake most likely belongs to me. Most of the diagrams below are also stolen / modified from his notes.

If we plot out the P–v graph (warning: not P–V graph) for various temperatures, we obtain the following:

Note that if V is close to b, then the material is in a liquid state since compressing it requires a disproportionately large amount of force. Conversely, if V is huge, then it is in gaseous state.

For temperatures below a critical limit

the graph has two turning points. The state (P, V) of the material is unstable between these two points. For if we reduce the volume a little by compressing it, then the decrease in pressure causes it to be compressed further; conversely, if we expand it a little, then the increase in pressure will continue to expand it. Indeed, within this region the material is in a mixture of liquid and gaseous state (we say it is in vapour-liquid equilibrium for the pure system).

How do we find the interval where vapour-liquid equilibrium occurs?

In order for vapour and liquid to coexist, the intensive parameters of both components must be equal. The temperature is already equal. Let the common pressure be P. The final parameter is the chemical potential μ (or the Gibbs free energy per particle), which is the Gibbs energy per particle since G(T, P, N) = μ(T, P) N. Thus we have:

Since our T and N are indeed fixed, we get

(here, P doesn’t increase monotonically over the integration region!). Recall that v = V/N. The result of the integral is hence the difference of the areas of the two shaded regions below. [ Note: this is non-trivial, do take a minute to figure out what the integration means over a non-monotonically increasing variable. ]

Hence, for (P, μ) of both the solid and liquid states to be equal, we need

, i.e. the two shaded regions have the same area. This is known as Maxwell construction, which gives us the condition for which the liquid and gaseous state can coexist. Note that the region is wider than the interval between the two turning points. The remaining intervals correspond to meta-stable states; these states can exist if we prepare the material sufficiently slowly and carefully but they’re highly delicate and unstable.

Now let the temperature increase until

. This approaches the critical point, beyond which there is no clear distinction between the liquid and gaseous states. 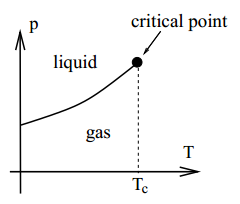 As one might imagine, this temperature is rather high (for water, it’s about 374°C). From van der Waal’s equation, this critical point can be determined via algebra, for it is where the P–v graph has an inflection point:

. The corresponding pressure and volume at the critical point are

And this concludes our very brief introduction to phase transition. Needless to say, we’ve barely scratched the surface of the applications of thermodynamics, but we hope the reader’s interest is sufficiently piqued to seek out other more definitive sources.