) plays a minimal role in the combinatorics of the symmetric polynomials. Hence, removing the parameter n turns out to be quite convenient; the process gives us the formal ring of symmetric functions.

Consider the set of all monomials

is a vector of non-negative integers such that only finitely many terms are non-zero. Thus

is not. Now for

has only finitely many non-zero terms, the collection of all

is a perfectly valid element of

be the subgroup of all

is a finite free abelian group with basis elements given by: 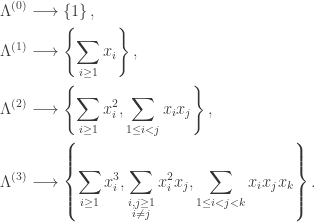 ; this gives us a homogeneous graded ring, called the formal ring of symmetric functions. E.g. in this ring, we have:

For each n, the map

Here is an alternate definition: let

Thus we get a sequence:

is defined to be the inverse limit of this sequence, which gives us a graded ring and a set of graded maps

one for each n.

are all isomorphisms; hence

is also an isomorphism.

We define the following in

etc, as before. Finally, the monomial symmetric polynomial

is the sum of all

such that when sorted in decreasing order,

, the above polynomials becomes their counterpart in

We thus have the following:

Indeed, the above relations hold in

for any n and d; when

shows that the same relations hold in

Similarly, the identities from earlier can be copied over verbatim by projecting to

Recall that we have an involution

for each n; this map does not commute with the projection

For an easy example, say n=2, the map

However, upon projecting to

This can be overcome by taking

is graded, we thus have the following:

The vertical lines are isomorphisms and the diagram commutes.

, we define the involution

to be that induced from

Note that in Λ, we have:

since these hold in

This entry was posted in Uncategorized and tagged combinatorics, partitions, polynomials, symmetric polynomials. Bookmark the permalink.