One of the most common applications of differentiation is in finding all local maximum and minimum points. 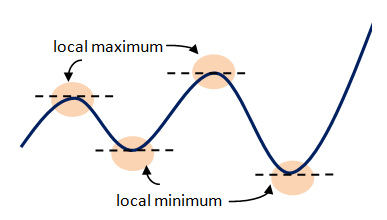 We’ll only prove it for maximum (for minimum, replace f with –f). Restrict f to a small open interval about a so that f(x) takes the maximum there.

By definition, the derivative f’(a) is

so the limit ≥ 0. These two inequalities force the limit to be 0. ♦

We have a piece of wire of length 2L. We wish to bend it to form an isosceles triangle so that the area is maximum. What’re the optimum dimensions?

Unlike secondary school calculus, we’ll solve this in a rigourous manner. Bear with us if the reasoning below seems a little lengthy, but we wish to have no gaps in our proof.

First, it’s not even clear a maximum exists even if the area is upper-bounded. To solve this problem: we’ll quote a theorem without proof.

In particular, since f(C) is bounded it has a supremum and an infimum. Since it’s closed, both these values must belong to f(C). Thus, f(C) has a maximum and minimum, which is the crucial property we need.

is closed if its complement Rn-C is an open subset of Rn. We’ll have more to say about closed subsets in a later article.

[ Question to think about: is it possible to find C closed but not bounded, and continuous f, such that f(C) is neither closed nor bounded? What about a bounded but not closed C? ]

Proving this requires the concept of compactness, which we’ll delay until a later article. We urge the reader to take our word for now.

Back to the problem. Bending the wire into a triangle of side lengths a, a, b gives 2a+b = 2L. By Heron’s formula, the area is:

so we need to maximise

Suppose we have a piece of wire of fixed length 2L and we wish to bend it to form a triangle. What is the largest possible area of the triangle?

First, label the sides of the triangle by a, b, 2L-(a+b). To form a triangle, we need the following inequalities:

Thus, we get a map f : C → R, where C is the subset of R2 defined by the above inequalities and f denotes the area of the resulting triangle. Since each inequality defines a closed subset, the resulting intersection is also closed. Finally, the second and third inequalities clearly imply region C is bounded.

. Since b varies, we differentiate this with respect to b and set it to zero, which gives b = L-(a/2), i.e. the sides are a, L-(a/2) and L-(a/2) so we get an isosceles triangle, which reduces this to the previous problem.

Conclusion: the largest area occurs when the triangle is equilateral.

In summary, since the image of a closed and bounded set under a continuous map is closed and bounded, it must attain a maximum and minimum (if the map is real-valued). Both these extrema points are either in the interior, in which case the derivative is zero since it’s a local extremum, or on a boundary.

This can be generalised as follows.

Mean Value Theorem. Suppose f:[a, b] → R (a<b) is a continuous function which is differentiable in the interior (a, b). There exists x in (a, b) such that

Apply a slight transformation to reduce it to the case of Rolle’s theorem: let

One particularly useful corollary is as follows.

, which is a contradiction. ♦

. Let’s check the behaviour of f(x) as x increases. The above results suggest that the derivative is helpful: indeed, writing

We thus see that:

This theorem is useful for evaluating the limit of f(x)/g(x) when both the numerator and denominator approach 0. However, we have to be careful in stating it since there’re many traps for the unwary. First, we consider one variation.

We’ll need the Extended Mean Value Theorem in the above exercise: for every x in (a, b), x≠c, there exists y between x and c such that:

to converge. E.g. take our earlier example of

and g(x) = x, defined on x≠0. Then the first two conditions are satisfied, but now

which doesn’t converge. On the other hand

by squeeze theorem. In summary, even if f’(x)/g’(x) fails to converge as x→c, it’s still possible for f(x)/g(x) to converge.

. [ Note that the converse isn’t true, as the above warning tells us. ]

Again the first two conditions of L’Hopital’s Rule are satisfied for this expression, so let’s look at the next derivative:

The same thing happens, so we take the derivative again: