We continue our discussion of thermodynamics. Warning: some of the examples will involve calculus and a bit of (ordinary) differential equations.

A system can do work, e. g. when a gas expands and pushes against a piston, the work done can be used to power an engine. When energy is supplied to a system in the form of heat, it’s found experimentally that not all of the heat is converted to work by the system. One then postulates that the system absorbs a certain amount of energy also.

Specifically, one postulates that there is a state parameter U of every system, which tells us the amount of internal energy in it. The first law then follows from the law of conservation of energy.

First Law of Thermodynamics. Consider a small infinitesimal time step. Let dU be the change in internal energy in the system, dW be the work done by the system and dQ be the amount of energy supplied to the system in the form of heat. Then dQ = dW + dU.

One must be cautious about the differentials dQ, dW and dU, specifically dU is an exact differential but dQ and dW are inexact differentials. What do we mean by that? It means, over a longer time step, if we only have access to the system at the initial and final states, then we can measure dU (since it’s only a change in a state variable) but there’s no way to determine the work done dW, as the following example illustrates.

. If we only know the initial and final states (P, V, N) and (P’, V’, N), we can’t evaluate the integral without knowing the entire path. 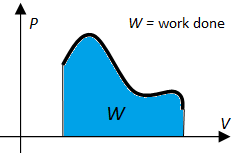 Hence for a homogeneous gas, we can write the First Law as:

which is the version normally taught in JCs (in Singapore).

Example 6. In the case of an ideal gas, kinetic theory of gases tells us that U = c·PV for some constant c. Hence, we have:

In the case of an adiabatic setting, we have dQ = 0 which gives us a differential equation for the adiabatic expansion / compression of an ideal gas:

. This is not hard to solve:

This gives the equation for an adiabatic transformation of an ideal gas.

Recall our definition of temperature as an equivalence class under thermal equilibrium. In fact, a moment of thought reveals that two diabatically separated systems A and B behave in the following way:

For the 2nd case we shall say that A is hotter than B or that B is colder than A. Now let’s assume the case where A is hotter than B which is in turn hotter than C. What’s gonna happen when we put A and C together (separated by diabatic wall of course)? In the cases where A and C are in T.E. or C is hotter than A, by connecting the three systems in a loop, we get a never-ending flow of energy from A to B to C and back to A!

The Second Law of Thermodynamics says this is impossible, so we must have A hotter than C. In other words, the set of temperatures forms a totally ordered set!

There’re two variants of this law.

Kelvin Law: there is no process whose only net result is the absorption of heat from a source and 100% conversion to (positive) work.

How does one prove the equivalence of Clausius Law and Kelvin Law? For that, we’ll need to rely on some physical intuition. E.g. suppose Kelvin Law fails; then there is a method to extract heat from a source to convert it to 100% work, but we can convert the work to friction to heat up any source, even a colder one, and so Clausius Law fails too. Conversely, suppose Clausius Law fails. Then we can form a never-ending cycle of energy flow as mentioned above and tap the energy to give work, thereby violating Kelvin Law.

Let’s say we now have two huge heat sources at temperatures T1 and T2 respectively, where T1 > T2. This just means T1 is hotter than T2, i.e. there’s a net flow of heat from the first to second heat source; it does not mean we’ve assigned a real-valued temperature scale. In fact, the very purpose of this section is to do just that: define a temperature scale in terms of non-negative real numbers.

is called the efficiency of the heat engine. To motivate this definition, imagine a mechanical engine which taps into a hot pool of gas, performs work, and loses the remaining energy to the environment (at temperature T2). The work done by the engine is useful since it can be converted to other forms of mechanical work, while the energy lost to the environment is wasted. 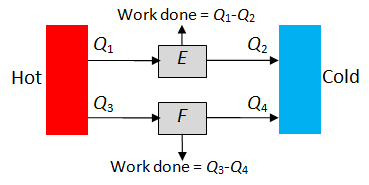 Then the following result holds.

Key result. If E is reversible, then

. Equality holds if and only if F is also reversible. [ In particular, this implies that the efficiency of a reversible heat engine is as good as it gets. ]

which is equivalent. Approximate

by a rational number M/N, where M and N are positive integers. Thus it suffices to show

. Let’s perform some iterations of the above heat engines: N times of F, followed by M times of the reverse of E.

What’s the net outcome of this exercise? The heat deposited in the cold source is

while the heat extracted from the hot source is

, all of which is converted to work! By Kelvin Law, the work done cannot be positive, so we have

In particular, the efficiency of a reversible heat engine depends only on T1 and T2. So let us write

, which is the reciprocal of the rate of wastage. It follows that if

, then from the following diagram:

the overall net result is an extraction of heat

from the temperature source

and a deposit of heat

to the temperature source

, with the difference converted to work. But this is precisely the work of a heat engine for

. [ Note: one subtle assumption is that we can tune F to take in an exact amount of heat

Next, we’ve only defined

. More generally, we shall define

. Under this new definition, we see that for any temperatures

and convert the balance to work, where the work done can be negative!

For any three temperatures

, we now have (regardless of the temperature ordering):

Finally, let us fix some base temperature

. The above 3 relations then tell us

for any two temperatures. So the only function that really matters for reversible heat engines is a single parameter g. We shall define this as our temperature scale.

Definition. For any temperature T, we shall associate to it a real-valued number g(T), which gives us a temperature scale. This is called the thermodynamic temperature of the system. Note that if we had chosen some other base temperature

, we would get a constant factor of this scale.