Pick’s Theorem and Some Interesting Applications

A lattice point on the cartesian plane is a point

where both coordinates are integers. Let P be a polygon on the cartesian plane such that every vertex is a lattice point (we call it a lattice polygon). Pick’s theorem tells us that the area of P can be computed solely by counting lattice points:

The area of P is given by

The polygon can be of arbitrary shape and size, concave or convex, but it mustn’t have a hole in it. For example, in the diagram below, the area should be 11/2 and not 9/2. To achieve the right formula, each hole contributes a value of +1 to the equation. This means that Pick’s formula is sensitive to the topology of the diagram (which reminds us of Euler’s V-E+F formula, but that’s another story for another day). 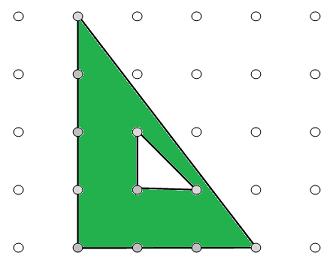 It’s a lovely result. Unfortunately, there’s no short proof of it, so we will merely hightlight the steps which constitute a possible proof:

Here’s a nice way of looking at Pick’s theorem: imagine the sides of the polygon forming the walls of a room, and at each lattice point, a light is placed. The sum of the angles formed by the lights within the room then add up to

. Indeed: each light at an internal point clearly contributes

This intuition also explains why the formula fails when the polygon contains a hole. In our example earlier (a triangle with a triangular hole), we have to take the sum of the external angles of the triangular hole, thus giving

on the inside and

on the outside. So the total angle is

which corresponds to an area of 11/2.

Fix a bound N and consider all positive rational numbers

This is called the Farey sequence of order N. For any two consecutive fractions

. Although not obvious at first glance, this follows directly from Pick’s theorem. Indeed, let’s draw a ray from the origin (0, 0) to the point (a, b) for each reduced fraction

in the sequence. Note that

is precisely the gradient of this ray. Then the Farey sequence is obtained by sweeping a ray through the origin, starting at angle

and stopping whenever the ray hits a lattice point (a, b) for some

, i.e. the shaded region below:

for, say, points B and C? Consider the triangle OBC.

Hence by Pick’s theorem, the area must be 1/2. On the other hand, by coordinate geometry the area is also

, so the result follows.

Note that we can vastly generalise the result. E.g. suppose we take all fractions

and sort them in ascending order. Then since the resulting shaded region is also convex, we also have

for any consecutive reduced fractions

Start with two horizontal lines: y=0 and y=1. At each integer m, construct the circle with ends of the diameter at (m, 0) and (m, 1). This gives an infinite sequence of circles with radii 1/2 which are tangent to both lines. Now between two neighbouring circles, construct the circle which is tangent to both, and also to the line y=0. If we iterate this process, we eventually get something like:

The nice thing is that the point at which each circle touches the line y=0 is rational, and two circles are tangent if and only if the corresponding rational numbers are consecutive in a Farey sequence of some order.

be a Farey sequence of some order. Write

. Then two consecutive circles are tangent.

1 Response to Pick’s Theorem and Some Interesting Applications